Chichen Itza cenotes are some of the most sacred of all Mexican cenotes. There are a number of beautiful cenotes close to the ruins of Chichen Itza, perfect for cooling off after a hot day sight-seeing. If you’re not into the ‘self tour’ aspect of travel – check out the Chichen Itza & Cenotes Tours below! And if you need some hotel inspiration click here for Chichen Itza hotel recommendations.

The Chichen Itza cenotes include Ik Kil Cenote (which is the most famous), Cenote Sagrado (Sacred Cenote, named so because of the fascinating archaeological discoveries found inside) and two others which we will discuss more below.

WHAT IS CHICHEN ITZA?

The stunning archaeological remains at Chichen Itza – a UNESCO-listed World Heritage Site – are some of Mexico’s most well-known Mayan ruins. Chichen Itza was a large city constructed by the Maya during what is known as the Terminal Classic period, around the time of 800 – 900 AD. Dominated by the breath-taking Kukulkan pyramid or otherwise known as ‘El Castillo’.

Chichen Itza is one of the 7 new wonders of the world. This city is over 1500 years old and was very significant to the Maya. It also provides evidence that this ancient civilization was very advanced with architecture, astronomy, and mathematics. The name Chichen Itza in the Yucatec Maya language means ‘at the mouth of the well of the Itza people’.

By the 10th Century, when the city had taken its current form, Chichen Itza became a regional power. Economically important, its dominance stretched from the northern coast of the Yucatan and down to the peninsula’s east and west coasts. The latest recorded date found is equivalent to 998 AD, and the city had fallen into decline by 1250. Even so, it continued as a living city until the arrival of the Spanish conquistadors.

The site was ‘rediscovered’ by the outside world in the mid-1800s. Thanks to a lot of restoration efforts, the Chichen Itza site has a collection of important structures still standing from the original city.  Until recently a hidden cenote has been discovered by scientists under the famous Kukulkan pyramid. This discovery provides further evidence that the Cenotes were extremely sacred and important in the Mayans beliefs.

The cenotes near Chichen Itza were integral to the development of the city as its only sources of freshwater. The Yucatan’s rivers run underground. The constant flow of water breaks up the limestone rock creating more underground passageways, caves, and cenotes. They are only ever revealed when the flow of the water eventually leads to the collapse of a cavern or cave roof.

A CENOTE IN CHICHEN ITZA RUINS

Each cenote near Chichen Itza is of the mature kind of cenote, big and open with no ceiling. The most famous of Chichen Itza’s cenotes is undoubtedly Cenote Sagrado, the ‘Sacred Cenote’. Found on the Chichen Itza archeological site, only a couple of hundred meters from the famous pyramid of Kukulkan.

When the cenote was investigated in the early 1900s, gold, jade, pottery, and sacrificial human remains were all identified here. Cenote Sagrado has an impressive diameter of 60 meters and is surrounded by vertical cliffs of up to 27 meters. Swimming is prohibited in this cenote – but you wouldn’t want to anyway. The depth of Cenote Ik Kil from ground level is equally astounding. The way it vanishes into a hidden world is very much part of this cenotes charm. Ik Kil is one of the busier cenotes in the Yucatan. While facilities include bathrooms, large changing rooms, lockers, and a restaurant, making it a great cenote after visiting Chichen Itza for families. 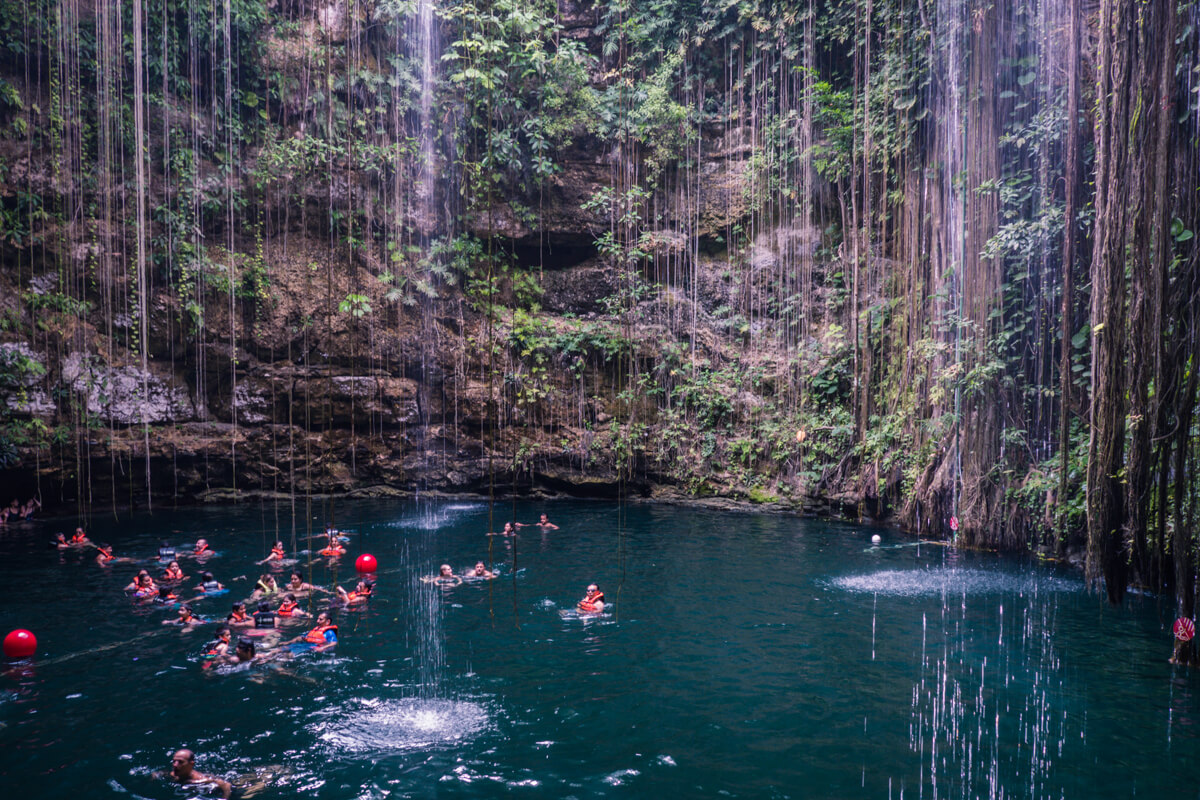 Cenote Yokdzonot, located just 18 kilometers from Chichen Itza, is another family-friendly cenote. Run by a cooperative of local Mayan villagers, this cenote came back to life after some of the local women realized they could improve the neglected cenote and share it with the public.
Two years of hard work from the women and Cenote Yokdzonot is one of the more beautiful cenotes in the area. Life jackets and snorkel gear can be rented and the cenote also offers a picnic area with hammocks and a restaurant. 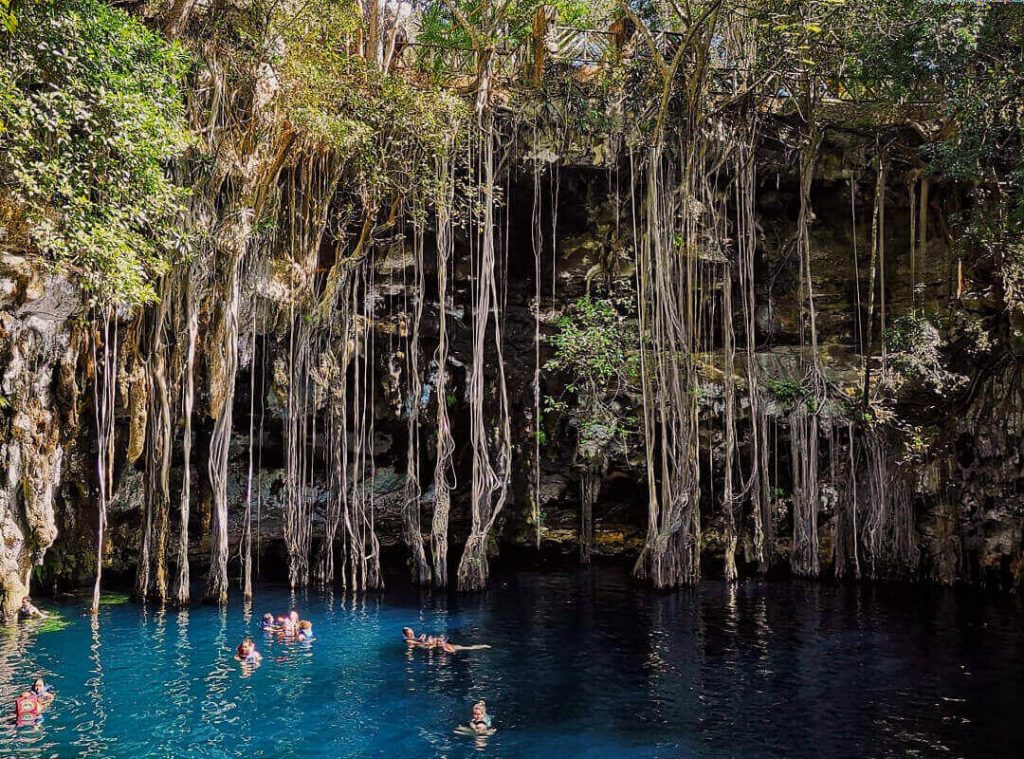 Cenote Lol-Ha is a little further away at 25 kilometers from Chichen Itza but is worth the journey. Surrounded by pristine jungle and colorful endemic bird species, Lol-Ha is one of the best cenotes in the Yucatan. And one of the least visited. Its waters glow a phenomenal blue thanks to the sunlight piercing the jungle canopy. With clear waters of 10 – 15 meters in depth, it is perfect for both swimming and snorkeling. 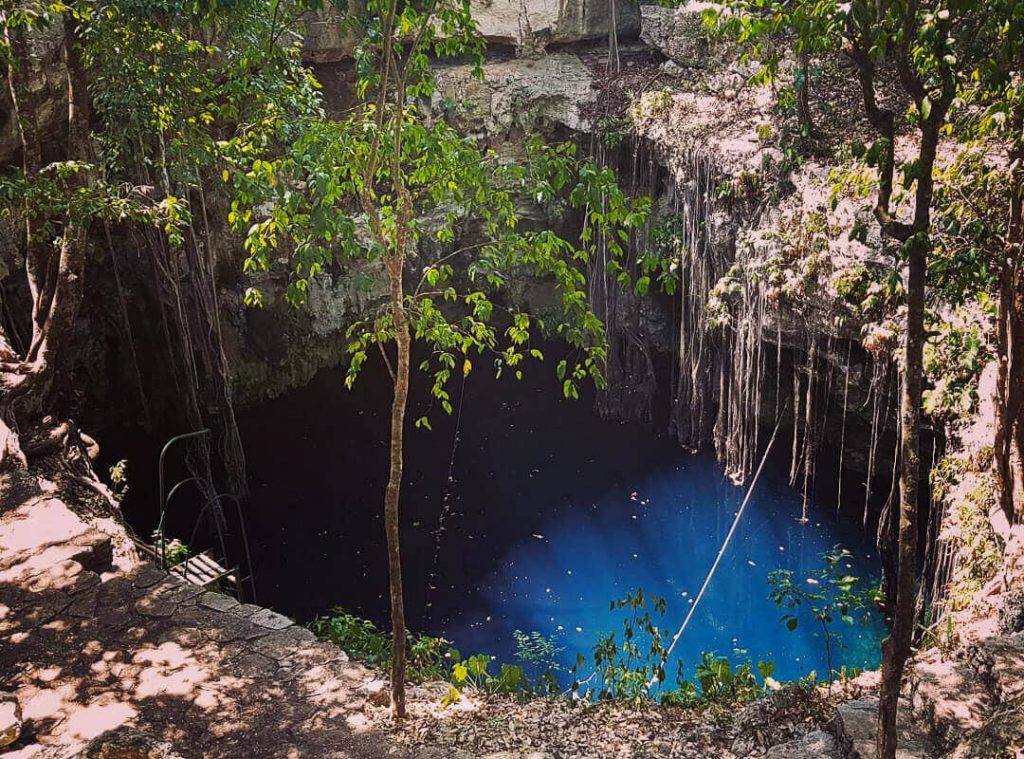 HOW TO GET TO THE CHICHEN ITZA CENOTES

Chichen Itza is home of the best Yucatan cenotes. They are a great way to freshen up after a visit to the pyramids of Chichen Itza. The site has lost none of its magnificence with the passing of the centuries. Who couldn’t fall for the wonder of its surrounding cenotes?

Not hirng a car? Why not book one of these tours to check out the sites, get picked up and dropped off to your hotel!

If you aren’t doing the day trip from Merida or Cancun and are looking at staying a couple of nights in the jungle near Chichen Itza, you have some amazing choices. The only hard part is deciding on whether your accommodation should be a luxury traditional Hacienda, staying on the door step of the ruins in a 5 star bungalow or in a hotel that is a short bike ride away.