Valladolid is an authentic charming colonial city located in the middle of the Yucatan Peninsula. Some of the most beautiful cenotes in Mexico can be found within just a few kilometers of Valladolid, or as is the case for Cenote Zaci, can be found right within the city center.

The Valladolid cenotes come in all types and sizes, from breathtaking open cenotes set amongst the jungle, to cave cenotes draped in decorations from the ceiling to the floor. You’ll be sure to find the perfect cenote in Valladolid for your enjoyment.

The cenotes in Valladolid all offer a visitor something slightly different between each one. Given this, it’s hard to know which cenotes near Valladolid would best suit you? To help, we have divided all of the Valladolid cenotes into sections to take the hard work out of deciding which of the cenotes you want to discover.

Need some inspiration on where to stay in Valladolid? Click here for hotel recommendations.

A QUICK HISTORY OF VALLADOLID

Valladolid was founded in 1543, a short distance away from the present city. It was moved further inland less than two years later because of a problem with mosquitos, on the site of the Ancient Mayan city of Zaci. Much of the stone used to build the Spanish city dated from this earlier settlement.

In the 1800s the city suffered from uprisings and revolts by the indigenous Maya people, with the city sacked before being recaptured by Spanish forces. Until the start of the twentieth century, it was the third largest city on the Yucatan Peninsula, and today contains mainly large Spanish-built mansions.

Valladolid is a charming city dating back to the era of Spanish colonial rule over Mexico. Not to be confused with the Spanish city of the same name, it is located at the heart of the south’s Yucatan Peninsula. Often nicknamed ‘the Sultana of the East’, the city lies an equal distance of 150 km from Yucatan state’s capital, Merida, and the resort town of Cancun, which boasts an international airport. What’s more, Valladolid is officially a ‘magic town’ (pueblo magico) for the unique experience it promises its visitors. Together, this makes Valladolid a great base from which to explore the many cenotes of the region.

THE BEST CENOTES CLOSE TO VALLADOLID

The following four amazing Valladolid cenotes can all be accessed bicycle from Valladolid. Bike rental is cheap and you can rent bikes in loads of different places around the center of Valladolid. The most popular rental place is MexiGo Tours, but you can also hire bikes from Bicicletas Zaci, Hostel La Candelaria, and lots of other large hostels and tour agencies.

Taking its name from the Mayan city, Cenote Zaci is located just a couple of blocks from the centre of Valladolid on Calle 36. Without bathrooms or changing rooms you’ll need to come ready to swim. However, Zaci is a beautiful cenote comprising a large cavern largely open to the sky and is the perfect place to get the true cenote experience without having to leave the city. 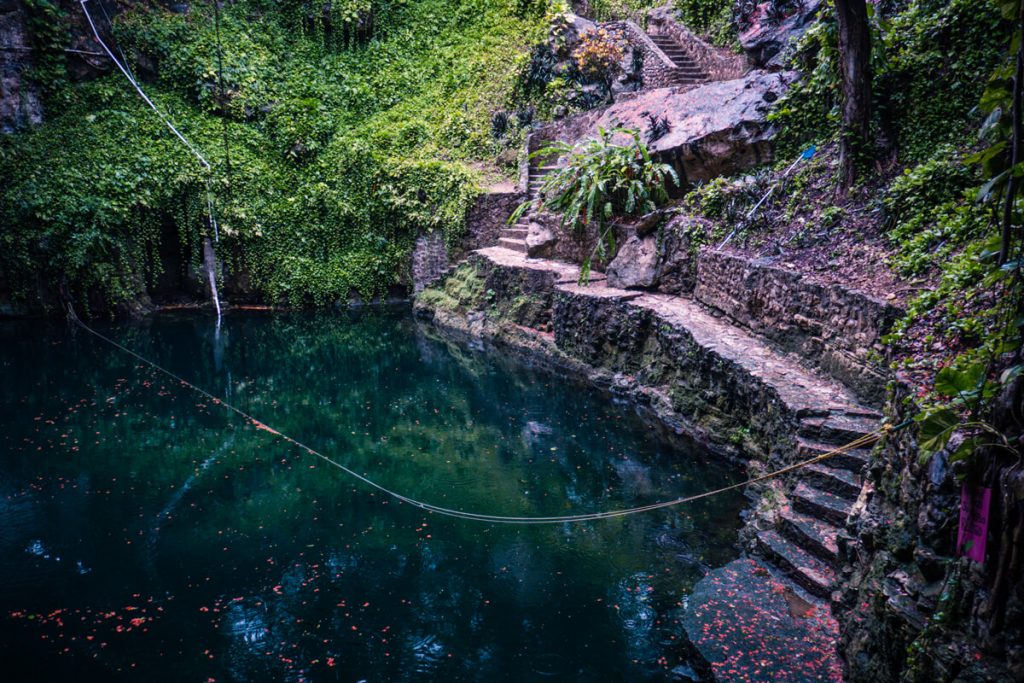 Another large cenote with beautiful rock formations looking something like melted candle wax, Cenote Suytun also has a walkway to the centre of its pool, so you can explore without getting your feet wet. Suytun is a very popular cenote among photographers. If you get there at the right time of day (around 9 am or 3 pm) light beams pour from the opening on the roof straight down onto the platform, giving Cenote Suytun a brilliant, whimsical feel. You can stay onsite at OYO Cabañas Suytun or very close by at OYO Hotel Zac-tún. 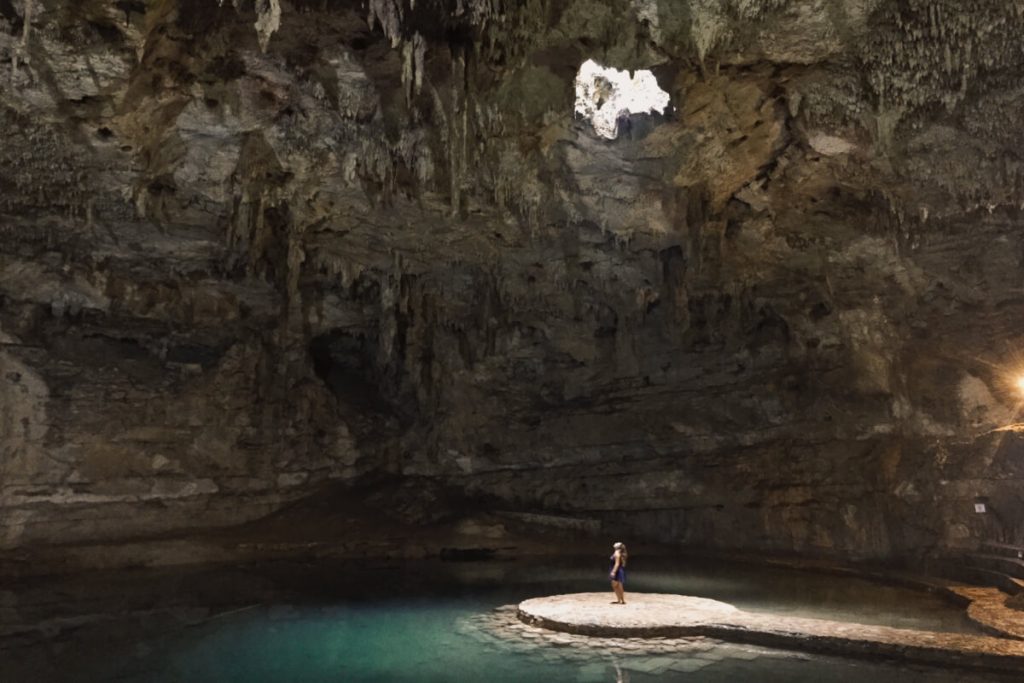 Both Cenote X’Keken and Cenote Samula – across the road from each other – are enclosed cave cenotes. Sunlight penetrates the caves through small gaps in the roof, highlighting the enormous stalactites there. Both cenotes are perfect for swimming in the cool waters and for viewing the incredible stalactite formations that hang from the ceiling. 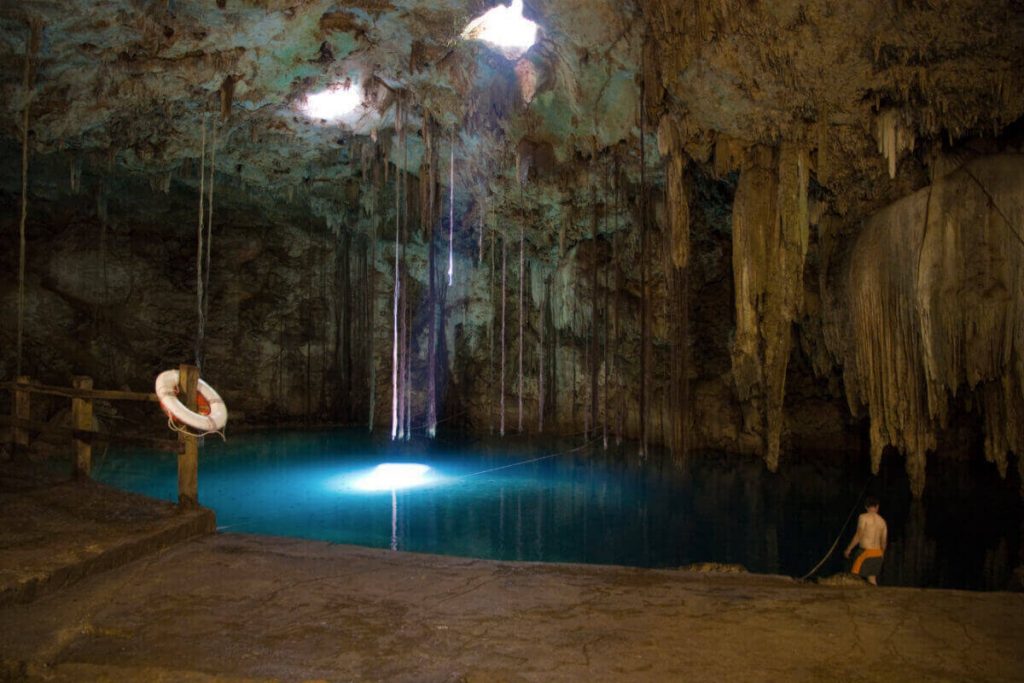 Located on the property of a Hacienda, Oxman cenote is one of the quieter cenotes in the Yucatan state, the high sinkhole rock walls of Cenote San Lorenzo Oxman are draped with roots and foliage, creating a magical atmosphere. Consisting of just a small doorway at ground level, a spiral stone staircase leads down to the water. This a beautiful cenote to spend the day with the family with great facilities. 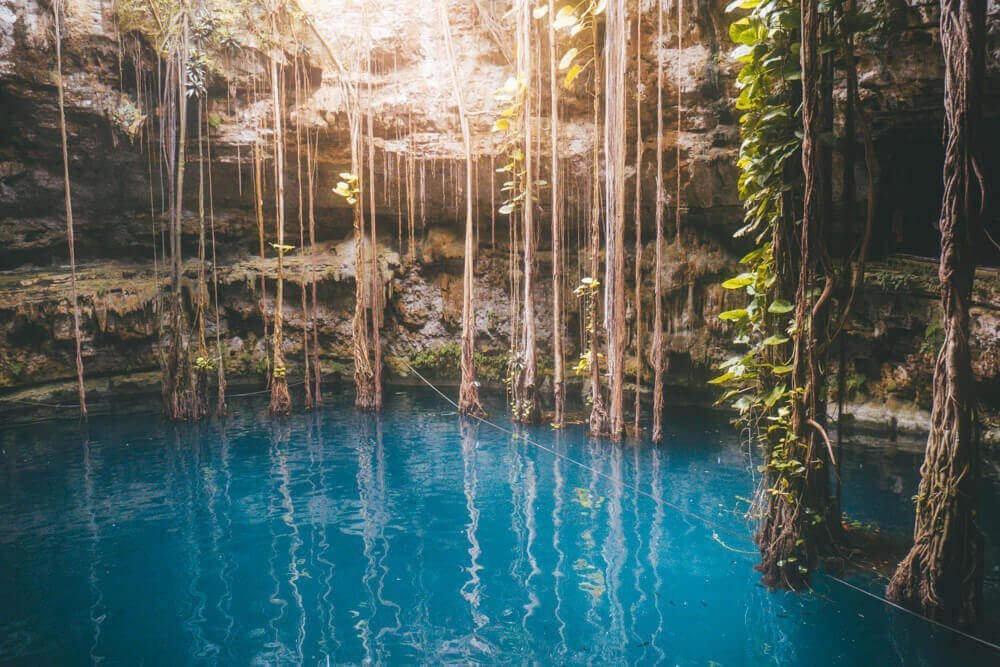 BEST valladolid CENOTES FOR THE ADVENTUROUS

Combine a jungle bike ride with a swim at the beautiful Cenote X’Canche (sometimes called Cenote Ek Balam). A 1.5 km jungle dirt path leads to the cenote from the entrance of the Ek Balam Maya Ruins. Set in the middle of the jungle, it is rustic, big and natural, with facilities for changing, bathrooms and picnic spaces. 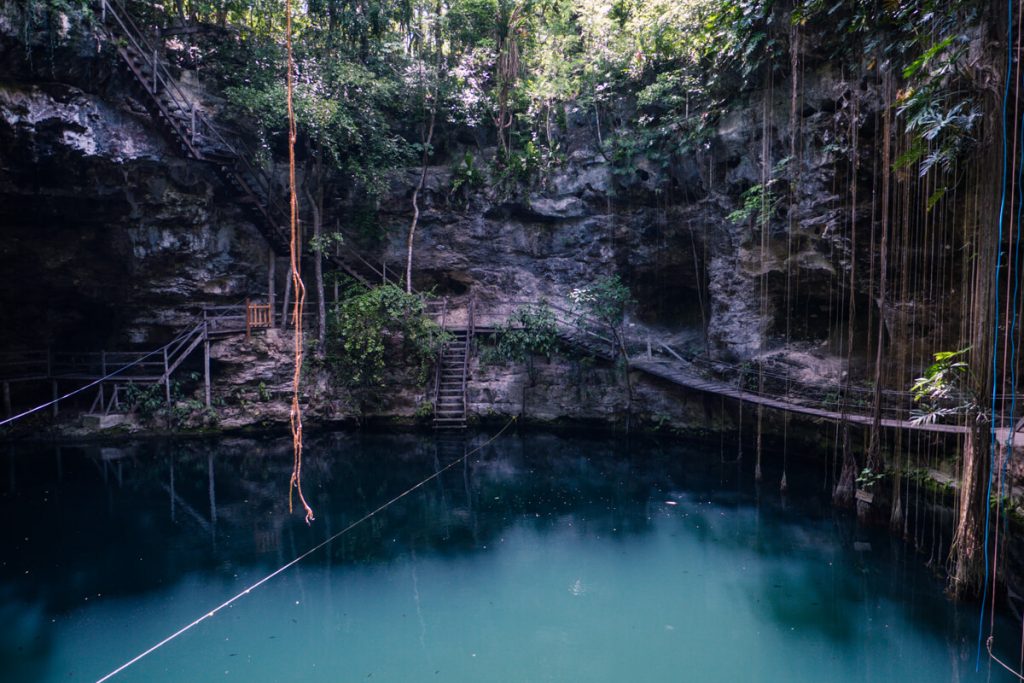 With amazing natural rock formations through its cave complex, its remarkable Cenote Fantasma only opened to the public in the middle of 2017. Artificial light illuminates the interior, while the crystal-clear waters just beckon you in. 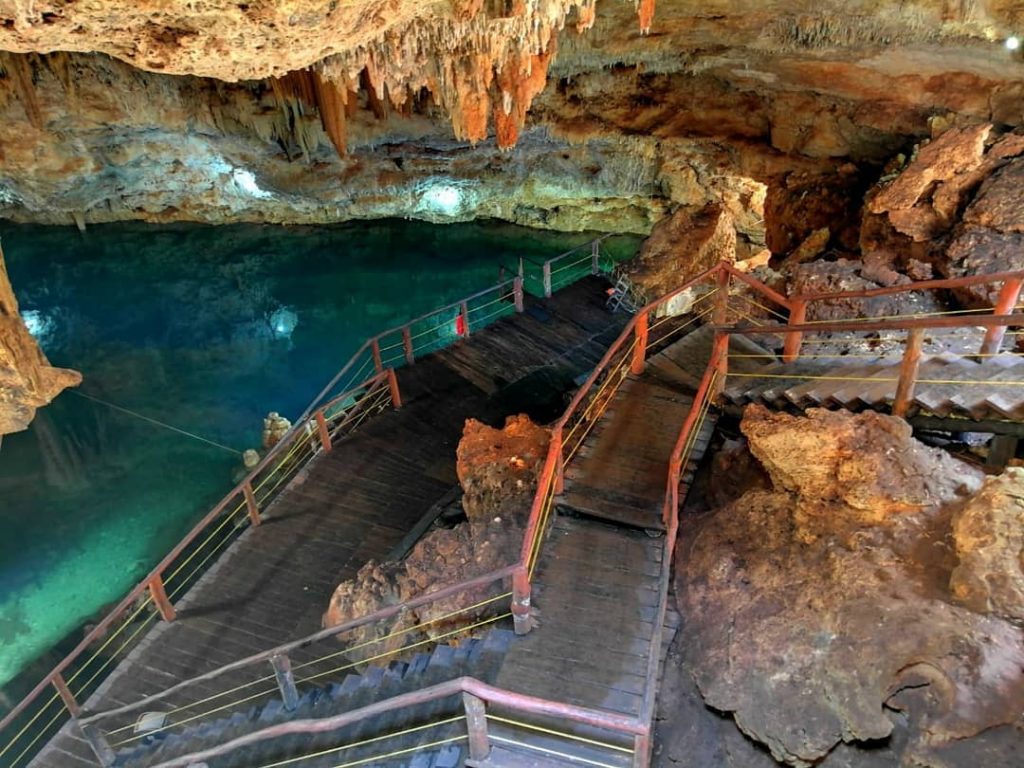 Another enclosed cenote with spectacular formations of stalactites dropping from its ceiling, Cenote Agua Dulce is not only a great hidden gem of a cenote for swimming, but is also popular with cave diving scuba divers. 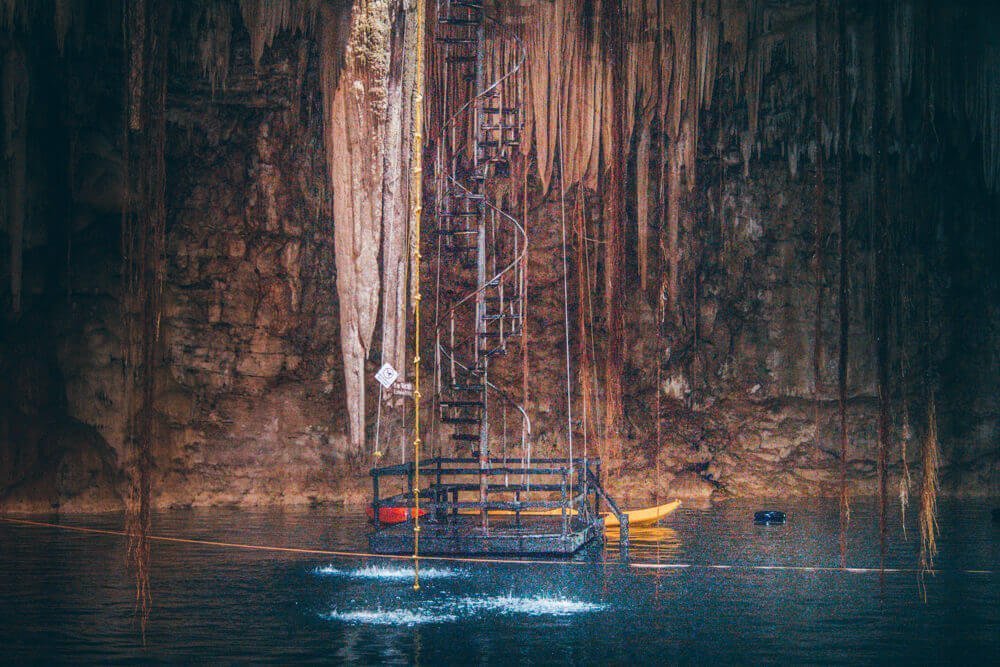 Cenote Palomitas is located in a small village called Yalcoba, about 30 kms from Valladolid. The cenote is actually found on the same property as Cenote Agua Dulce, so you could easily visit the two on the same day. Palomitas is a young mysertious cave cenote with only a small hole in the ceiling letting enough light in to pierce through the crystal clear deep blue waters. Float around and admire the stalactites that decorate the ceiling. 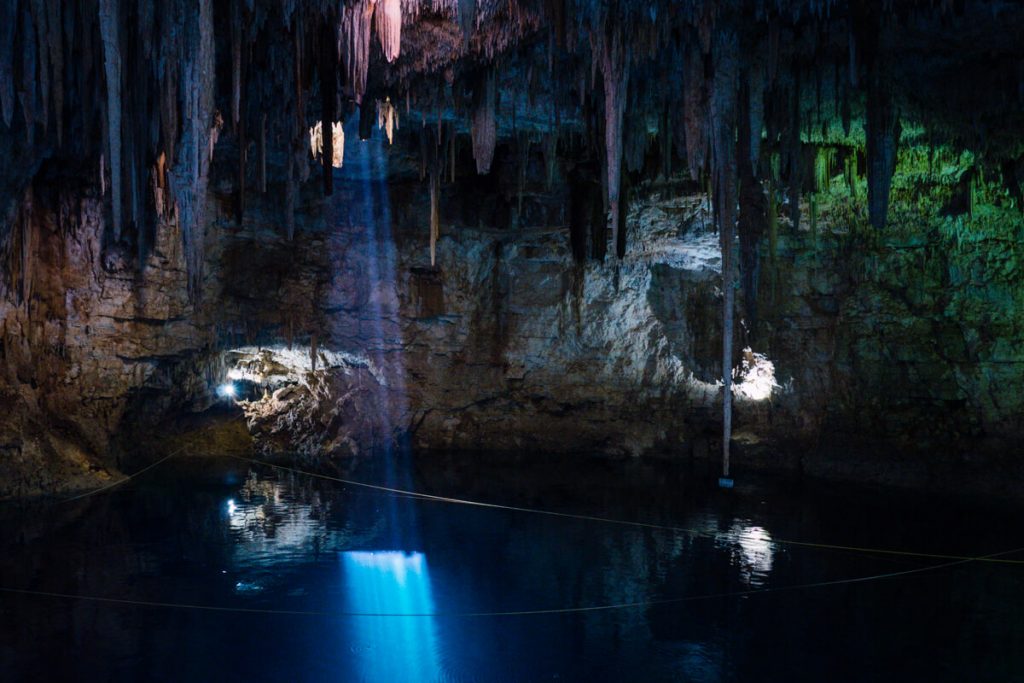 BEST CENOTES IN valladolid FOR SWIMMING

Being well set up for tourists means Cenote Hubiku is also one of the more family-friendly cenotes in and around Valladolid. A wide staircase leads into the cave of the cenote, with a wooden platform making it easy to get in and out of the water. There is also a restaurant, gift shop, and village of traditional Mayan homes. 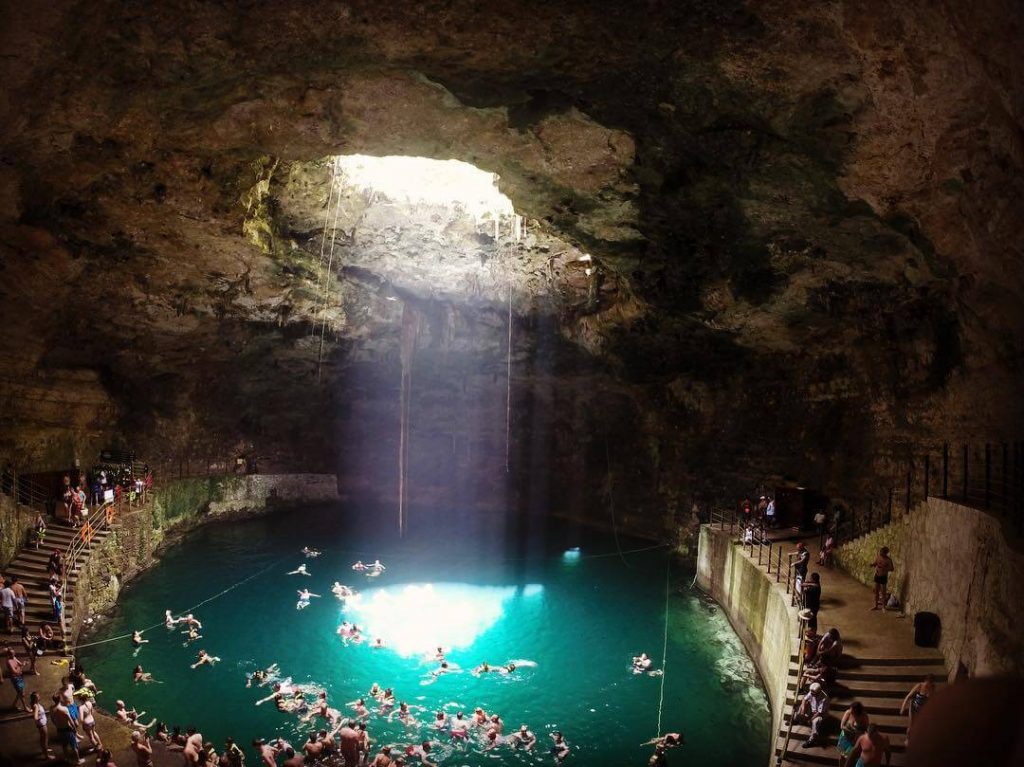 Meaning ‘drop of water’ in the Maya language, Cenote Choj Ha requires you to enter its cave via a ladder, and descends some 25 m below ground level. Run by the community, it is the favourite cenote of many locals and visitors alike. The artificial lights help you see the highly decorated cave. 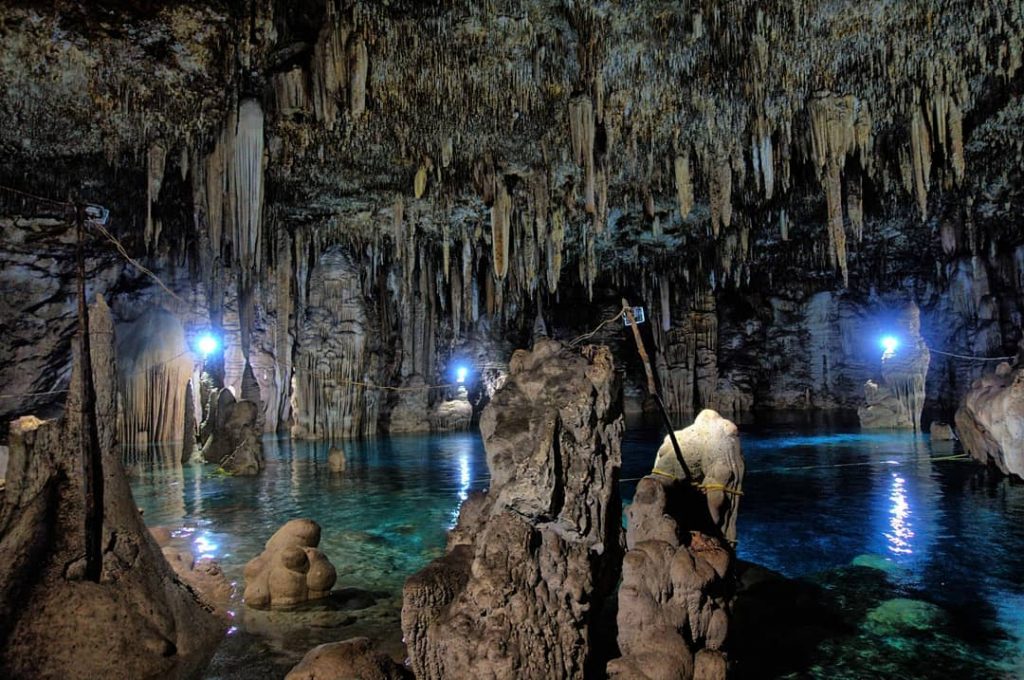 Cenote Saamal is located at Hacienda Selva Maya, a 10 minute drive from Valladolid Center. Saamal is a huge open cenote, with steep walls and a man made waterfall. Facilities include changerooms, lifejackets, lockers and even a certified lifeguard. If you are feeling hungry they also have a buffet of traditional Yucatec dishes. Its a popular stop along the Chichen Itza trail so be sure to get there early.

Cenote Kikil is located in neighboring town Tizimin, which is roughly 1 hr from Valladolid. This cenote would be a perfect day trip in conjunction with the pink salt lake Las Coloradas. What you see today is the result of the community coming together to make Kikil a beautiful oasis for visitors.
The width of this huge open cenote is around 30m with a depth of 55m. The facilities include a restaurant, cabanas, hammocks and rest area. 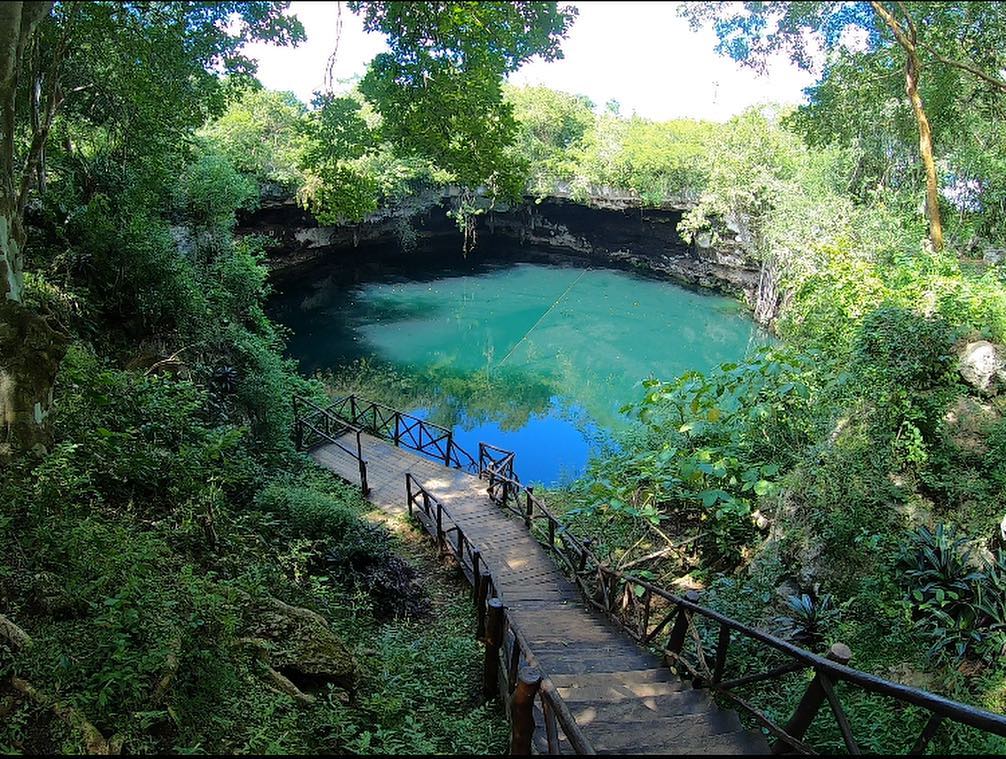 You can’t fail to visit the natural phenomena of the Yucatan’s cenotes when visiting Valladolid, and with our handy guide, you’ll know exact which of the sinkholes are a best fit for you and your interests.

Want somebody else to take the wheel and show you the sights? Check out these tours!

Staying a couple of days in Valladolid is a MUST! Being a small city even staying on the “outskirts” isn’t that far away from the action.

If art and design are your thing, beautifully designed Hotel Zentik Project is approximately 1km from  the center. Jungle themed, colorful art, swimming pool in a cave this place has earnt itself a 9.1/10 with guest reviews on booking.com.

If you are looking for boutique style in the heart of Valladolid, Casa Tia Micha is set in a bright colonial style building with beautiful gardens. Only a 5 minute walk away from Cenote Zaci!

Otherwise, stay on the most beautiful street in Valladolid ‘Calzada de Los Frailes’ at Casa Xcocay. Highly reviewed for their friendly hosts, cleanliness and best value for money.

Check out the Valladolid Hotel Map below!